The demand on a communications network is higher than ever before as the technology industry has seen major advancements in recent years with more and more devices connected to the Internet. It began approximately 10 years ago with the wireless industry as phones became “smarter”. Nearly two-thirds of Americans are now smartphone owners, and for many these devices are a key entry point to the online world. Currently, 64% of American adults now own a smartphone of some kind, up from 35% in the spring of 2011.

Then about 5 years ago, the TV industry introduced Smart TVs and other streaming devices such as Roku, AppleTV, and Amazon Fire. We now have gaming consoles, appliances, thermostats, lights, and so much more connected to the Internet. According to Sandvine’s 2016 Global Internet Phenomena Report Spotlight, the average household was found to have at least seven active devices in use every day, while at the top end of the spectrum, 6% of households tuned in with more than 15 active devices, a marked increase over previous years. Unsurprisingly, video streaming activities for services like Netflix and video game downloads now make up the bulk (65%) of home broadband use. Sandhill has seen a 1000% increase in bandwidth consumption in the last four years alone. While the technology has evolved at a rapid pace, the old networks of yesterday are simply not strong or big enough to support this kind of usage. This is why Sandhill, like many other Internet providers, is seeing network congestion which can slow down Internet speeds especially during peak hours. Under the leadership of the Sandhill management team and the Board of Directors, Sandhill has taken the steps to build a new faster, stronger network for tomorrow.

In 2015 and 2016, Sandhill worked diligently to build out its fiber network laying the foundation for the coming years. With 125 miles of new fiber buried and 40 new equipment hubs, Sandhill now has nearly 500 miles of fiber in the network and has shortened the average distance from customers to equipment to within 1 mile. This allows for faster speeds for more customers. Starting in January 2017, Sandhill will begin doubling broadband speeds to over 8,000 subscribers. Each Member will be converted individually and many may require new equipment to be installed in the home. While the process has already begun, Sandhill expects it to take until the middle of the year to have 100% of its Members upgraded to the new speeds. Meanwhile, they are also adding more fiber and equipment in higher populated areas to help with network congestion. This on top of doubling speeds will create a much improved experience for Members while using the Internet.

Now that the fiber foundation has been laid, Sandhill will begin providing Fiber to the Home (FTTH) in 2017. FTTH will provide broadband speeds up to 100Mbps and pave the way for even faster speeds in the future. Members within the Chesterfield town limits will be among the first to be converted to fiber. While FTTH begins rolling out in Chesterfield, crews will be preparing the network in Pageland and McBee to be able to begin offering FTTH by end of the 2017. Sandhill will contact the Members when they are working in their area to schedule an appointment time.

As times have changed, Sandhill will adapt to provide the absolute best service at an affordable cost for its Members and customers. Building tomorrow’s network will take time and substantial amount of financial investment. Sandhill will strategically buildout the network staying consistent with its conservative roots, looking out for its Members, all while providing the services they need. Over the last five years, in addition to investing over $15 million in the network and providing over $16 million back to its Members in capital credits, Sandhill also provided donations of close to $200 thousand to their communities. 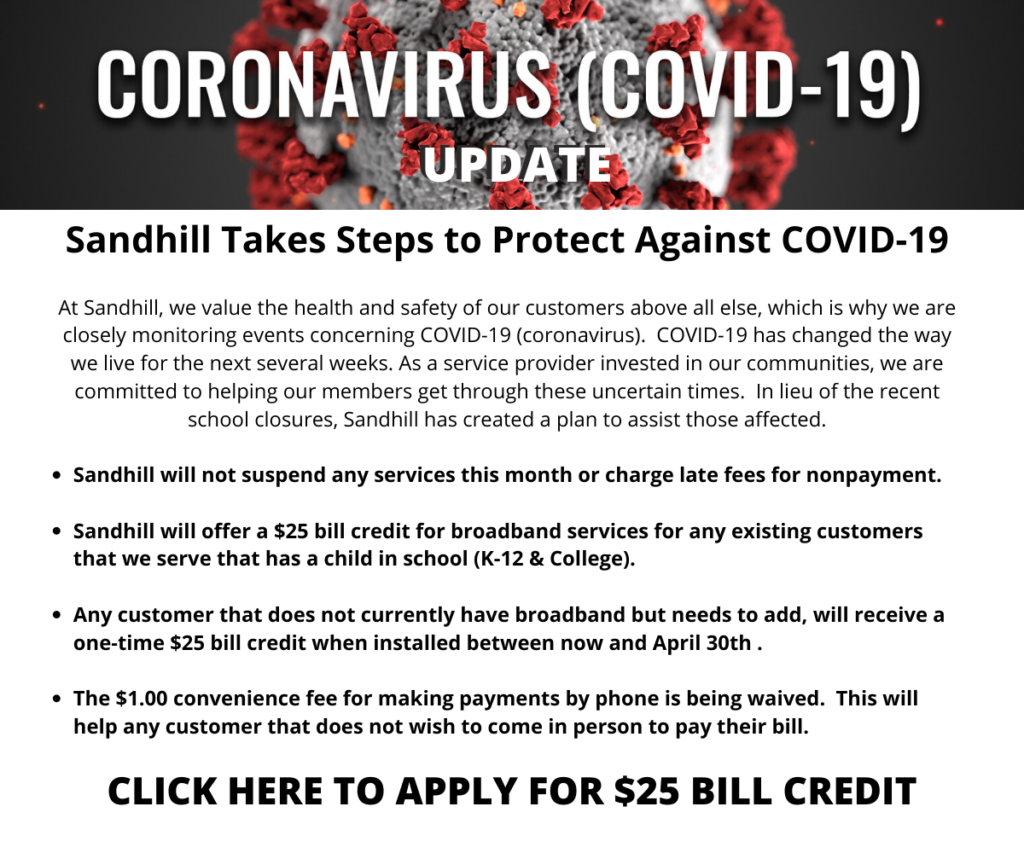